Only stockbrokers or the people who lived in Downton Abbey drank wine when I was growing up in England in the 1950s; our family meals would have been accompanied by water or beer. Mother had her annual glass of Dubonnet at Christmas while my father couldn’t taste anything less than 40 degree proof. His loyalties seemed to lie with the Navy as I can only remember him drinking Cutty Sark whisky, occasionally with a beer chaser, and smoking Capstan Full Strength or Senior Service. ‘Your father’s three sheets to the wind again’ my mother would say, continuing the maritime theme when he was a little unsteady on his feet. Stronger language was employed for those occasions when he was, as PG Wodehouse described it, ‘oiled, boiled, fried, plastered, whiffled, sizzled and blotto’. Mother claimed he would live forever because his insides were pickled in alcohol; sadly this turned out not to be true. It was only when I moved to France that I finally came to grips with wine.

Paris in the 1970s was bristling with British and American expatriates, mainly accountants and lawyers, and we tended to stick together.

On Sundays we met for lunch at La Brasserie de L’Isle Saint-Louis or at Chartier and on Saturdays the more sporting kicked a ball about at the Standard Athletic Club in the forest of Meudon. Like many clubs around the world it was created by British ex-pats in the back-room of a bar, this time the Horseshoe Bar in the rue Copernic. That was in 1890; four years later the Club won the first ever French Football Championship; the Frogs sometimes forget where their soccer history lies. During a state visit to France in May 1972 Queen Elizabeth toured the Club’s playing fields in an open car. She had left a little too late an important part of her visit, a last meeting with the Duke of Windsor, for the Duke was too sick to leave his bed and died a month later.  Paris was full of Brits struggling with the perfect subjunctive.

Everyone read the Herald Tribune, in those days graced with the wit of Art Buchwald, as well as the Paris Metro, a weekly English language paper where we scanned the classifieds for baby sitters and second-hand appliances, read reviews of new films and in-vogue cafes and attempted the world’s first bi-lingual crossword.

New World wines as well as French and where a customer could taste the product before buying; these were not just innovations they were revolutionary ideas in France at the time. Only in retrospect do we understand what times we lived in.

Les Caves de la Madeleine was in La Cite Berryer, a narrow thoroughfare linking rue Boissy-d’Anglas  and rue Royale and its proprietor was Steven Spurrier, a young English Master of Wine with the effrontery to sell the French their own wine.

Three years later he purchased the locksmiths next door and turned it into a wine school, which many of us soon found more interesting than the sports club on Saturday mornings. 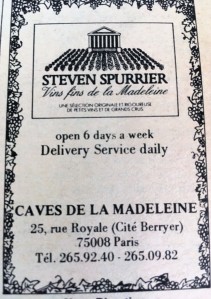 Courses at L’Academie du Vin were conducted in English because it was designed to attract the expatriate community, but soon the natives were clamouring to get in and Francophone experts were added. Spurrier was now actually teaching the French about wine; the sheer cheek of it! But it didn’t end there.

Spurrier was convinced that great wines could be produced outside of France, but there was little enthusiasm for foreign wines in a country where Burgundians didn’t drink Bordeaux. His answer was to organize, together with Patricia Gallagher, an American journalist at the Herald Tribune, a blind tasting of wines from France and the USA. The tasting took place in the Intercontinental Hotel on 24th May 1976; it was to be a fitting bicentennial nod to the American Revolution.  The judges were all French and all wine connoisseurs (including Raymond Oliver of Le Grand Vefour, and Christian Vanneque, somellier at Le Tour D’Argent), leaving a general assumption of a French victory.

Four white Burgundies were matched with six Californian Chardonnays and four red wines from Bordeaux with six Cabernet Sauvignon wines from California. The French were fielding some big guns, Mouton-Rothschild and Haut-Brion among the reds, Meursault and Puligny-Montrachet amongst the whites, while none of the American wines were well known. Each judge assessed each wine, presented in neutral bottles, by giving a score out of twenty. The result was a bigger upset than Waterloo. Californian Chardonnays took first, third and fourth places; not one judge placed a Burgundy in first spot. Stags Leap, a Californian winery, took top honours in the reds. Jurist Odette Khan, Editor of La Revue du Vin de France, asked to change her vote while a more generous Aubert de Villaine of Romanee Conti merely said ‘On a pris un coup de pied dans le derriere.’

In the mythological version of the Judgement, Paris’ choice of Aphrodite, or the sensual life over the contemplative and active, resulted in a ten year war and the destruction of Troy. The wine ‘Judgement of Paris’, a term coined by George Taber of Time magazine, produced happier results. Californian wines boomed, Chateau Montelena, the winning white, became a star and in 2007 Stags Leap, created only four years before the tasting, was sold for US$185 million. No, French wine shops did not suddenly start stocking USA wines, but the point had been made, if great wines can evidently be produced in California, why not South America, South Africa and Australia?  One important result was that French producers began joining the competition instead of fighting it. In the latest ‘Eldorado’ of wine, the high country of Oregon, there were 65 vineyards thirty years ago, now there are 676. Among the growers is none other than the Drouhin family from Burgundy, makers of the Beaune Clos des Mouches that lost out in the Judgement.

A film of the event ‘Bottle Shock’, made in 2008, left Spurrier unimpressed even though he was portrayed by that gentle artist, Alan Rickman.

With Spurrier’s financial backing, an ex-employee, Chuck Scupham, opened a restaurant next to the Academie. It was called Le Moulin du Village and its faux rustic air and ‘cuisine du marche’ made it a novelty at first, but Chuck is an unfortunate name for a chef.  In 1980 another ex-employee of Spurrier, Mark Williamson, opened perhaps the first real wine bar in Paris. When the choice in most French cafes was between a basic red and white varietal, Willi had an extensive selection of fine, especially Rhone wines; he was known as the ‘Rhone Ranger’. Willi’s is still there, where it first opened, in rue des Petits Champs. L’Academie du Vin was sold to Baron Rothschild’s Chateau Clarke in 1988.

An Australian expatriate, Barbara Harvey, spotting some 1978 Coonawarra Cabernet Sauvignon at the Caves de la Madeleine, and mindful of Spurrier’s good taste, bought a case of the same as soon as she returned home to Sydney in 1981. Thirty five years later we drank her last bottle at Tetsuya’s, or rather most of it, because due to a decanting mishap some of it was lost. A week later Barb received a call from Tetsuya himself, asking for details of the lost wine. Two weeks later a bottle of 1978 Coonawarra Cab Sav arrived on Barb’s doorstep. That, mes amis, is class!