Last night Nonna made polenta, which she served up with a rich tomato ragu’ of Italian sausage and the remains of yesterday’s barbecued beef ribs. Today we’ll have the rest of the polenta, cut into pieces the size of Tim Tams, baked in the oven then fried and covered with melted gorgonzola. The only drawback with polenta is that it clings to the surface of the saucepan like yellow cement and makes washing up a nightmare. In the Veneto region of Italy polenta used to be a staple before women found the enlightenment to break a culinary tradition that had lasted since the Venetians first introduced maize from the New World in the 17th Century. Now they serve up dishes that relieve them from stirring and scouring pots for half an hour each night.

Fittingly, it was in the Veneto that I first tasted this dish of ground cornmeal prepared in the form of porridge. As a relief from apartment life in the centre of Verona I had bought one of ten or so terraced 18th Century case di contadini grouped around an uneven piazza in the Comune of Mezzane di Sotto, a small village located some 30 kilometres north west of Verona. There was a small plot of land behind the house, a field with a kaki (persimmon) tree, some long-neglected vines, a tangle of silver birch and willow along the bank of a narrow torrente. On weekends we would drive out to the house for a day of gardening and daydreaming of what we would do with the house when we had the funds necessary for its restoration. Our weekly journey took us past the village of Mezzane di Sotto, off the metal road that continued on up to Mezzane di Sopra and onto a “strada bianca” or unmade road that wound through orchards of cherry, Houseman’s “loveliest of trees” [i]. In springtime light winds dusted the track with their bloom and we drove through a tunnel of snow. 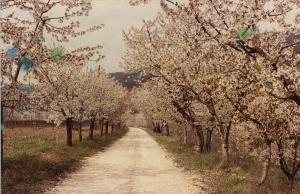 The strada bianca that brought us to the hamlet rose sharply into the foothills of the Dolomites passing a medieval stone trough, supplied by a constant trickle of cool spring water and once used for washing the community’s bedding and clothing. 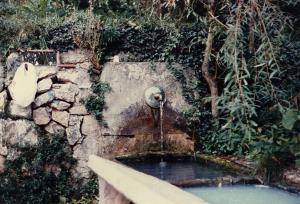 Bordering the hamlet was a torrente, gushing with water from the melted snows at the outset of spring and, in summer, a hot dried bed of white stones overhung with willow and buddleia, teeming with butterflies. In this earthly paradise Antonio, the hamlet’s only permanent resident, hunted all year round with calm disregard for the imposed limits to the seasons and lists of endangered species. Nothing he killed went to waste. The flight and contour feathers of birds were made into dusters, the down into stuffing for cushions and pillows. No part of an entire pig went to waste, and from the ceiling of Antonio’s cellar hung every conceivable type and size of salami while in his shed there were cages of rabbits, wild birds and snails waiting to be served up in a sugo for the nightly polenta. The only animal safe from Antonio’s gun was Stellina, his small, black and white, hyper-active dog that would race down the track to meet and yap at any approaching vehicle.

Antonio, then retired, lived with his wife Adriana and teenage son Andrea, who worked at the local supermarket. Although they lived permanently in the hamlet, the family had no car, no hot water (unless boiled on the wood-fired stove), telephone or indoor toilet. We first met Antonio and his family shortly after we had bought the house. It was while Cristina and I were clearing the garden one warm, Sunday morning that Antonio and Adriana (then in their fifties) appeared from nowhere, scythe and sickle in hand and, without a word, began working alongside us. Later, over bread and cheese and wine, which they had also brought, we were invited to dinner. That evening over a meal of polenta con lumache (snails) we negotiated the exchange of my kaki tree for a cherry tree and began a friendship that would be terminated only by my incessant desire for change. 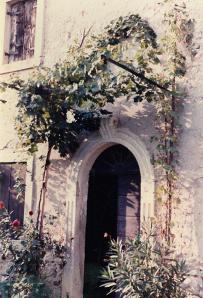 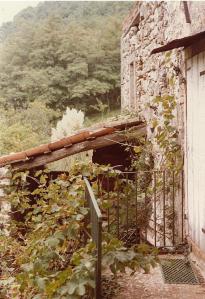 We soon understood that the family ate polenta every evening, Adriana standing, stooped into the fireplace, patiently stirring a cauldron for what seemed hours before pouring the molten porridge onto a wooden board in the shape of a huge ping-pong bat where it was allowed to cool and solidify for a couple of minutes before being cut into serving portions with a length of string. The most popular of the family’s polenta dishes was “con osei” (with sparrows). Cristina was put off by the tiny, brittle feet and beaked skulls that protruded from the polenta, for the birds, plucked and fried, were tossed in and eaten whole. The rest of us crunched away happily. Antonio had his own, unique way of catching the sparrows. Scattering some seed under the kaki tree that sat in the middle of the small yard behind the house, he would stand at the window of the outside toilet and wait until there were a number of birds pecking at the seed when he would release the end of a rope (looped cunningly over the tree’s branches), letting a lampshade fall over the unsuspecting sparrows. After dinner Adriana would scour the polenta pot and then watch the black and white grainy images on their antique television while I would help Antonio manufacture cartridges for the next day’s hunt. One winter evening on a solo visit, I was persuaded to stay overnight. Adriana showed me to my room and pulled back the bedclothes to remove the bed-warmer – a wooden “cage” in which sat a saucepan full of red-hot coals. Pleasantly drowsy after a meal of polenta con coniglio and a bottle of Antonio’s unlabelled Valpolicella, I slipped between the rough, toast-warm sheets, blew out the candle and lay for a while contemplating the cold, starry sky, overcome with a feeling of peace and security. I had been, as I recognized later, experiencing true happiness.

In October of 1986, Antonio and Adriana were at our wedding lunch in Mezzane di Sotto at the Bacco D’Oro. There was Risoules ai carciofi, Tortellini al burro fuso e salvia, Rusteghi alla Selvaggina and Anitra al forno, but no polenta.

Last night I tried to locate our little hamlet at the end of the cherry road using Google’s satellite map but with no success. Perhaps, like Brigadoon, it only appears, briefly, once every hundred years.

[i]
Loveliest of trees, the cherry now
Is hung with bloom along the bough,
And stands about the woodland ride
Wearing white for Eastertide

Now, of my threescore years and ten
Twenty will not come again,
And take from seventy springs a score
It only leaves me fifty more.

And since to look at things in bloom
Fifty springs is little room,
About the woodlands I will go
To see the cherry hung with snow.

From “A Shropshire Lad”
A E Houseman