I love Italy. Whatever one may say about the odd retail hours, the museums closing on Mondays and the general traffic chaos, the people are confident of their Italianness. And why shouldn’t they be, seeing that they can trace their very beginnings back to Aeneas, son of the Trojan Prince, Anchises, and the Goddess Venus? After escaping the Greeks, years of travel and a lengthy and tragic affair with Dido, Queen of Carthage, Aeneas and his fellow Trojans settled in Latium where his descendants Romulus and Remus founded Rome. Aeneas was later recognized as a God (Jupiter Indiges) an honour unlikely to be bestowed upon Kevin Rudd or Tony Abbott. No need to apologise to the Latin tribes who were (sometimes forcefully) Romanised; no need for a referendum to redesign a flag that they feel no longer projects their current image, no need (since Il Risorgimento) to change the country’s name. No need to constantly rewrite history to adjust to political climate change; what could possibly be better than Virgil’s version?

I love Milan; the world capital of style is bright, efficient and beautiful. Retail thrives and the Milanesi, rich or poor, dress as smartly as their purse can spare. The people are thongless and grunge-less and I see no instances of gym-wear being worn as street-wear. Everyone over the age of 20  sports a proper pair of shoes. Speaking of clothes, isn’t it strange how a young woman’s first romantic feelings are often accompanied by a desire to knit? In the first flush of love, Honeybee chose to make me a cable stitch pullover, which was pleasing to look at with its naïve, artisanal appearance, but un-wearable on account of the sleeves, which were only suitable for someone whose knuckles scraped the floor when he walked upright. Worried that I might die from exposure before reaching the altar, Honeybee abandoned her knitting needles and patterns and presented me with a rugged pullover made from the mooring ropes of Norwegian trawlers. Too heavy to be worn by a puny accountant, it lay, impregnating my undies with the smell of tar and smoked herrings, at the bottom of my tallboy for several years until I was allowed to buy my own knitwear.

We are staying in a delightful penthouse apartment just off via Torino, some 200 metres from the Piazza Duomo. In addition to the essential rooms we have a shrub-filled terrace, a tastefully furnished conservatory and a good selection of books on Renaissance art. The owners, who occupy the rest of the roof, are charming and spend a good deal of their spare time sewing coloured beads onto baskets, which they sell through a network of immigrant hawkers (vu’cumpra’) sending the proceeds to a village hospital in Ghana. Bravi!

Honeybee in the conservatory

A stroll with Franca through the charming quarter of Brera to the Pinacoteca. Art students throng the courtyard and stairs but inside we have the place to ourselves or rather us and ten thousand Madonnas and Child. There must have been a law in the 15th century limiting artists to this one subject. Only occasionally does a dazzling Raffaello or distinctive El Greco stand out. The early Christian martyrs are also well represented – pale Sebastians studded with arrows, Catherines on a variety of wheels. Thankfully, a civic-minded Milanese has left the museum his collection of more recent works and we can forget divine motherhood and bloody martyrdom for the peace and order of Giorgio Morandi and the metaphysics of Giorgio De Chirico. What did grab my attention in the Renaissance department was the painting of St John the Baptist by Francesco del Cossa, together with this piece of prose by British writer Ali Smith from her novel ‘How to be Both’:

“It is a feeling thing, to be a painter of things: cause every thing, even an imagined or gone thing or creature or person has essence: paint a rose or a coin or a duck or a brick and you’ll feel it as sure as if a coin had a mouth and told you what it was like to be a coin, as if a rose told you first-hand what petals are, their softness and wetness held in a pellicle of colour thinner and more feeling than an eyelid, as if a duck told you about the combined wet and underdry of its feathers, a brick about the rough kiss of its skin.”

The display of apt quotations on art by contemporary writers was the idea of Pinacoteca Director, James Bradburne, former curator of the Palazzo Strozzi, brought in to spruce up the gallery as part of Prime Minister Renzi’s campaign to modernize Italy’s museums in general. Ali Smith’s novel deals in part with the imagined life of Francesco del Cossa and his allegorical frescoes in the Palazzo Schifanoia in Ferrara.

Although some cannot move 200 metres without the help of Trip Advisor, it should be avoided at all costs, depriving as it does the tourist of the pleasure of discovery; you are also unlikely to find someone with the same tastes and priorities as yourself among all those anonymous reviewers. I’m an off-season sort of chap really; always have been. So nice travelling to an out-of-season destination: February in Venice, April in Sicily, August in Paris, December in Verona; marvelous! Not all that keen on the presence of other tourists when I’m sightseeing, especially groups and the earnest ones wearing sandals made out of military webbing and bits of rubber tyres. There’s much pleasure going in the opposite direction to the heavy traffic as there is in being an hourly rather than a seconds and minutes person. No need for a second hand on your watch; you can always use your i.phone to time an egg.

We have shifted to Southern Sicily and to the charming city of Modica. Our rental car is a Citroen Picasso. It’s roomy and comfortable and drives nicely; it has a clunky, boxy design, presumably from the artist’s Cubist period. Modica is only a short drive to the sea and we make for Marzamemi, an old fishing village of Arab origins. In the 19th century the village was the site of a functioning tonnara, where great quantities of tuna were caught and processed. The deserted, crumbling slaughterhouses and the black, rotting tuna boats are a little unsettling but not enough to put us off enjoying a fritto misto mare and a chilled bottle of Grillo on the sea-front terrace of La Cialoma.

Further along the coast we stop at the Isola delle due Correnti, where the Ionian Sea meets the Mediterranean and then a little further on at Portopalo. Here, near the harbor, lies a graveyard of wooden fishing boats, some burnt hulks, others, stripped and paint-faded, awaiting incineration. On the ground, among the rocks and under the hulls, are the flotsam and jetsam of their passengers – a plastic bottle, a shoe, a torn and grubby headscarf. These are the boats that have survived the journey from North Africa with their cargo of refugees. The nearest Italian landfall to Libya is the island of Lampedusa, but for those boats that miss it, Portopalo is where they end up. At the immigration centre near the port some of the latest arrivals are playing football in the sun; you can see why they call it ‘the world game’.

While Sydney continues to congratulate itself on its fine dining and gourmet food shops it still cannot produce a crunchy baguette, a tasty tomato, a punnet of ripe, unblemished strawberries or a decent salame. Try asking a butcher for a corn-fed cockerel or a capon and he will merely point to his row of uniform, trussed and glad-wrapped hens. If you are planning trippa alla Livornese and ask for tripe the odds are he will throw his hands up in horror. Honeybee has found an excellent salame di suino nero.

The salumista also sells a tasty salame d’asino or donkey meat sausage. Like its pork brother, it is suspended for a several months in a cool cellar to mature, hence the expression ‘hung like a donkey’.

‘I know nothing more noble than the contemplation of the world’ said Flaubert and there is no activity more conducive to rumination than the shelling of 2 kilos of peas.

Occasionally available in Sydney, ready shelled and at scandalous prices, fresh peas in Italy are a cheap and popular delicacy served with pasta or as a piatto unico and occasionally, in Sicily, popping up in the sticky centre of an arancino.

Mind you, I’m not all that partial to some Sicilian dishes. Pasta col macco (overcooked pasta in a soup of dried broad beans) and the little pastries filled with a mixture of ground meat and chocolate called ‘npanatiddi I can live without. Not that I’m opposed to the addition of chocolate to meat dishes, after all lepre in dolceforte (jugged hare) can be tasty, but the appeal of ‘npanatiddi has its roots in ancient efforts by the monks to conceal the consumption of meat during Lent, and old customs die hard on this island.

A morning stroll through the quartiere of Santa Teresa in Modica Alta. This is a charming area of quiet, narrow streets and tree-shaded piazzas. Nespoli, bougainvillea and rose hang over garden walls; old men the size and colour of walnuts sit talking and not talking outside cafes. It’s warm and peaceful and it beckons like the waters of Lethe. Many houses are for sale and I’m tempted but I’m not ready just yet and we start walking down to Modica Bassa. 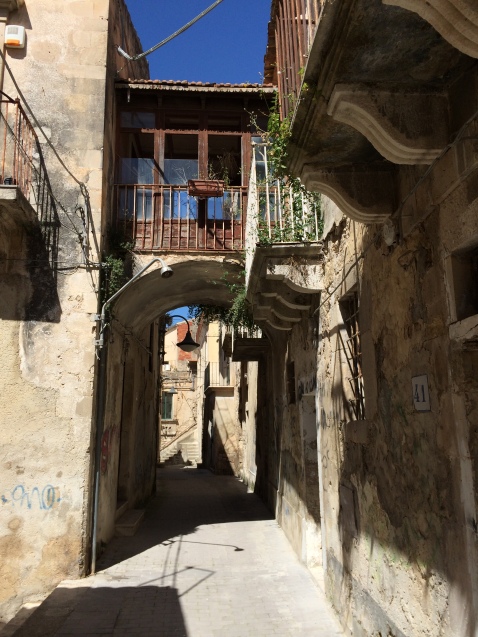 On the balcony of an apartment just below the Duomo they are filming an episode of the detective series ‘Inspector Montalbano’. The Inspector’s (actor Luca Zingarotti) appearance on the balcony is received with the same degree of enthusiasm as Giuseppe Garibaldi’s. There is a rattle of applause and cries of ‘Bravo Luca‘, while Honeybee melts into a damp spot on the pavement. 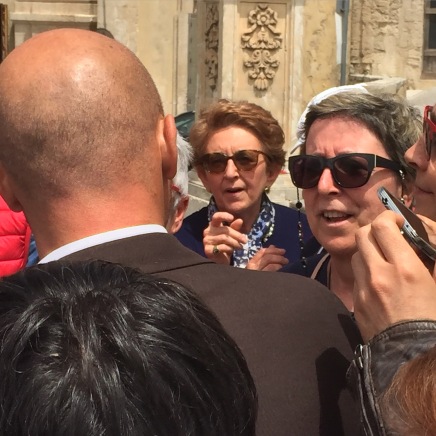 Honeybee asking Montalbano if he wants her phone number

One thing that England and Modica have in common is the same patron Saint, St George, a Syrian-born soldier in the Roman army, executed on Emperor Diocletian’s orders for refusing to recant his Christian faith. England’s most visible association with the Saint is the sign ‘The George and Dragon’ attached to various pubs sprinkled across the country; it’s a very different story in Modica. We are here on St George’s Day, April 23rd, for Modicani the most important feast day of the year. Marching bands parade along Corso Umberto I, families clog the gelaterias and there is an antiques fair in the Piazza Corrado Rizzone displaying, inter alia, old car radios, 45rpm records, rusting keys, coins, second hand books and ceramic jelly moulds from Caltagirone. At 5 pm a crowd gathers outside the massive doors of the Baroque Duomo of San Giorgio in Modica Alta. With cannons booming and the bells of every church in Modica ringing out, the doors open and through the red and white smoke of Roman Candles, an equestrian Saint George is borne out into the sun by his red-coated disciples. Preceded by a band, San Giorgio is then paraded through the town until, near midnight, he is carried back to the Duomo and tucked away for another year. 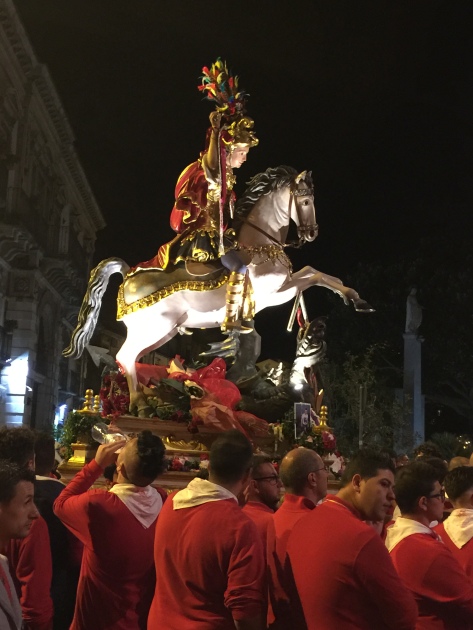